Alasdair Roberts is a musician (primarily a guitarist and singer) who is based in Glasgow Scotland. He has worked with Drag City Records since 1997, firstly releasing three albums of self-written material under the name Appendix Out and then several albums under his own name, the most recent being A Wonder Working Stone by Alasdair Roberts & Friends (Drag City, 2013). He has also released music on labels such as Secretly Canadian, Galaxia and Stone Tape Recordings. 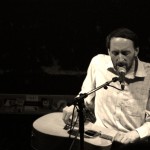 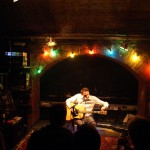